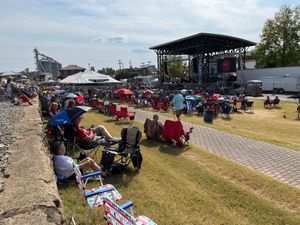 The crowd was growing. Folks started dancing and having fun. I looked over at Bob Stroger and noticed he was rock solid. Bob has been playing bass guitar professionally for 50 years. From Pinetop Perkins on up . He played with the original Muddy Waters Band and so many more. If anybody body's played the blues nine out of ten times this guy played for them. Bob is an older guy but he stayed in the pocket the whole time.

And Kenny Smith is so encouraging. A young guitar player, Shawn Mcdonald mentioned he had a bad experience that morning. Something didn't work out right. His experience turned out to be a bad show for him. Kenny  stepped up to the plate encouraging the young man that some days it's that way but it all works out . Keep looking forward to the next one. Kenny is so positive.

Jock Shock was the band's director. Jock is from Hayward, California. I met him several years ago when we played Ca back in 2018. When he got to the show we had a VIP button on his shirt he was quick to point out to me,  I'm a $BVIP. He's had his button ever since 2018.

Jock invited me to the trailer and we went over the song lists and different keys. Very helpful of him. He's also a big helper to Mr. Fillmore. It was a great experience to play for O.G.Fillmore Slim. The crowd enjoyed it. The Biscuit is back !