I woke up thinking , What is a #BluesVIP club ? 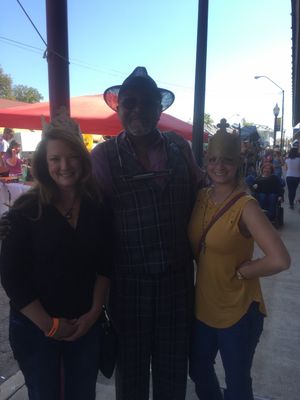 Good morning Blues people. Downtown one day I looked down at the sidewalk and saw my name written in chalk. I laughed and took a picture of it. I thought it was cool. I went around on another block and saw it written again. Somebody had written my name on the sidewalk with chalk. It was cool promotion. Later that week my friend Mr. Dip told me that he did it.

Another time after playing the show a young lady walked up to me with my name written on her forehead. She asked to take a picture with me. Of course I laughed and did it. I thought it was so amazing. Another time a young lady wrote my name on her arm. And she held her arm out and showed me and it almost brought me to tears. I love my fans, and I love their promotion efforts. I think it's called Guerilla Marketing. And I really appreciate all those antics.

Some of my fans on TikTok have been buying T- shirts and making videos wearing them. The shirts promote the hashtag #BluesVIP are getting the word out even farther.

When I was in high school my best friend William was a promoter for a promotion company. His job was to put posters up around town and put flyers on cars. Sometimes I'd go out and help him. We'd go to the mall and go to big parking lots and stick fliers on the windshield of cars and put them on the windows in different stores around town promoting events coming into town. Sometimes we'd take tickets to the beauty shops. It was a fun job to help promote. I learned a lot doing it.

I've been playing music for a long time. And I know quite a few musicians. But since the dawn of the new recording technology, I've seen lots of Blues artists make recordings of themselves. They have boxes of CDs at home. Boxes of DVDs sitting in their bedroom. Hundreds of CDs or thousands of CDs, but they don't have any fans to sell them to. It never dawned on them just how many 1000 is.  One thousand might not sound like many. But when you have 1000 CDs to get rid of you recognize just how many it really is . It's like playing in an empty club. You put on a great show, but there's no one there to hear it. Kind of heartbreaking. It's a nightmare. A situation I've tried to avoid. I decided to go about it backwards.

In the old days touring was a necessity. Trying to get the word out and expose an act to help build a market for people wanting the music . Since then live streaming and social media has totally changed the game. I believe it's possible to do pretty well without a lot of major touring.

To sum it up in one sentence. What we need is a giant Street Team. Imagine having a street team of promoters dedicated to promoting blues and soul music 1000s of people who are willing to put up a sign, willing to write your name on the sidewall or put up a poster. It would totally change the dynamic of music distribution. That's what I see as the blues #BluesVIP club. Thousands of people who love blues music enough and willing to put in some promotion muscle. In exchange for that they gain access to exclusive content and  privileges. And so, the #BluesVIP Club was born. I've been working on this since 2015.  We got work to do.