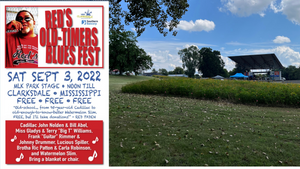 Imagine turning a mundane event into something special. Creating content where there is none. Turning a life event into a cinematic story. That's interesting to me. It's called content creation.

I've been doing it for a while without realizing what I was doing. But the more I do it  the more I pay attention to it.

One thing that made it stand out to me was playing in the Old Timers Blues festival last weekend. I didn't want to capture the festival on video. I just wanted to play the music and not be distracted from enjoying it by filming the festival. But I did capture lots of the audio. So I do have some memories.

Music is what festivals are all about. It gave me a chance to think about the skill set required to create cinematic documentation of any event.

For instance washing a car, something as mundane as that, can you turn washing a car into interesting content ? Something that will hold or interest an audience for three to five minutes?  Washing your car could take 30 or 45 minutes.  To thoroughly wash one could take an hour. Can you imagine a viewer wanting the entire process ?

The filmmaking skill comes in deciding what to capture, what shots to put together in order to make that event interesting. How to turn a one hour job of washing a car into a three minute video. What shots would you shoot if the average shot was only three seconds?

Three minutes there will be 20 shots per minute or 60 shots over the course of three minutes. 60 shots telling that story of how that car was washed. Those shots could be thought out beforehand.

We know that if you average 3 seconds each shot you'll need 60 of them. It doesn't hurt to have a plan going in so that you wouldn't forget anything. At least have some shots to start and some idea for the music or some idea of the narration . It would make shooting the carwash more thorough and organized and more likely to be completed.

The next level skill set would be to actually film it and operate the camera. That's a whole different skill. The next skill would be editing and putting the sequences together to tell the story and framing the story .

Those things are unique skills. To create and shoot video content in today's society. To tell a story in that way is powerful  especially if you have an audience for the content. It's Life streaming vs Live streaming .